What is this thing?

0 What is this thing? 0
This is just a place for projects to honorably get canned. Thrown out assets, projects that break which is unfixable... by me at least. Projects in which I have lost interest or drive. In many ways it is a sad place - but I'd rather see it as a really happy place, where things that would've never seen the light of day got to go outside anyway. Even though they are ugly - broken. Even though the creator has been mad at them for the most part.
However they know- they've got to know- they know that the creator is merely mad at himself, disappointed even. These small lively things are loved and they are all part of a journey.
Enjoy them! And take them for what they are. 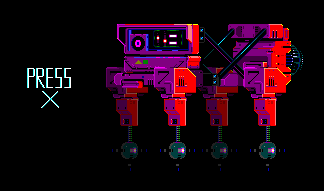 Little capy guy is a mailman

This little guy can deliver packages of many sizes - not the XXL ones though, but from XS to XL, S, M, L in between. They're all good. He is considered a hero in the marshes. Packages might contain a new vase, or some nice shoes. Could also contain a bomb or chicken pox. Capy mailman never knows - a messenger is what he is.
Indsendt af Andreas N G kl. 15.16 Ingen kommentarer:

Gauge playing games are scarce, but I love'em. 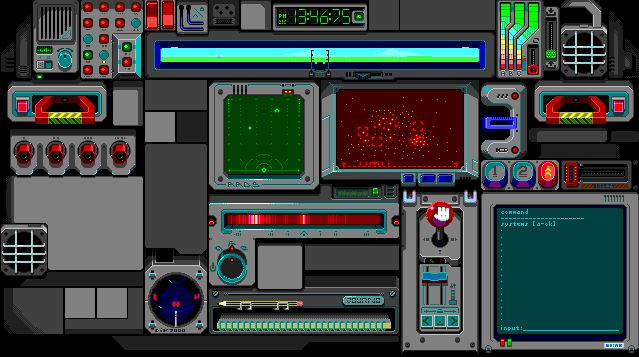 The slit towards the top of the screen is the only "real" view you got of the world. Rely on diagnostics, gauges and stats to get a clear picture of the environment.

This is a half finished dashboard. 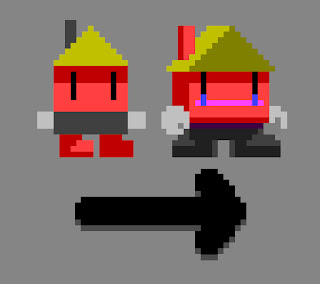 A tiny road and a bus stop. Wonder where it leads. They should get off the road though.
Indsendt af Andreas N G kl. 11.09 Ingen kommentarer:

Ok, I got some things that is just super hard to find solutions for on the internet, maybe it is because no one wants to do the things I want.

How to make a bullet (ie) "draw on top of fog" in Game Maker? Well I didn't find a way to make it draw on top of fog with it's own colors, but I can at least keep the bullet visible by "fogging" in another color than my standard black fog color.

I finally figured out how to manage to get 3D to work in Game Maker! There are not much on this anywhere, and the stuff there is is super vague actually.

I might be posting some usable things that I've discovered later.

One thing that I still haven't got a grasp of is the d3d_transform scripts, it's like they do not behave the way I would imagine. 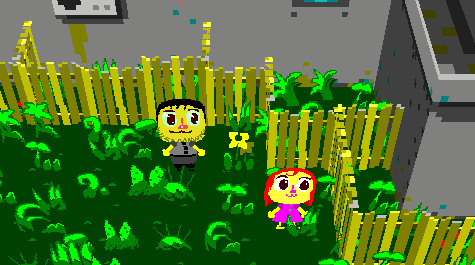 Sadly, because I haven't wrapped my head around the d3d_transform scripts I haven't found a way to point the sprites directly towards the camera. Here I must look directly at YoYo for not having implemented a d3d_draw_sprite and d3d_draw_sprite_ext script for exactly this. I would expect such script to be part of the package, and it would be able to draw a sprite in depth, pointing directly towards the camera, without perspective deformation at the fringe of the view, and the _ext could contain an angle argument for rotation around the forward axis of the camera and the usual scale arguments. Tsk Tsk Tsk YoYo.

Anyway - here is my d3d_draw_sprite script, it is super simple, and all it does is to hijack the d3d_draw_wall script, carve away some redundancy and add some important things.

(the sprite, and img arguments could be left out for a more streamlined version,
now when I think about it, this is more a _ext, than a standard script)

I love the lo-fi look of a 480*270 game running at 30fps in a somewhat simple engine like Game Maker.

For the shrubs I made a system which does only handle them when they are close to the players - when a player stands on top of a shrub the shrub scales a bit up in X and scales all the way down in Y to make it appear as if the shrub is stepped upon. It works pretty well. Right now I can't handle a large number of shrubs, but I am sure I can up the amount if a bit of optimization is performed.

You run around in the backyard inside the city. There are fun things to do while playing the game in co-op, possibly with your son or daughter. When the game is being played between 8am and 6pm the game is a co-op experience of just messing about, and the off hours in is a single-player experience. After a couple of days of play, one evening the other, younger character is gone. Only a clue to where he/she has gone is left.
The older player will have to find the younger character again.

You play with a younger individual, a little brother or a son or a daughter. The game will demand quite different things of you, as the younger player is likely not as skilled as the older player. This could be flipped if necessary. It is a matter of playing this with a less skilled player, it doesn't matter if the younger is the skilled one or vice versa.
So the skilled player will be helping the younger one, and the younger one will be communicating and discussing the situations with the older player. Both characters will have a certain skill-set or properties that are very different to each other. For example the experienced player will be doing some jumping, shooting. The less experienced player will be doing navigation, halping out, like pushing buttons, solving puzzles, collecting things, maybe even matching things (sounds a bit condescending, but it isn't, at least here it'll be for a cause, not just killing time. :D)
It is empirical to incorporate puzzles that demands the two to communicate, maybe even give the non-skilled player some opportunity to show his/her wit and knowledge of things that the skilled player might now have the slightest clue about.
One way to do this could be to concentrate more subjective opinion-oriented tasks to the non-skilled player and direct more hands-on performance based tasks towards the skilled player.

Main objective would be for this game to be super asynchronous, which is something not many games possess, even today, 2016. 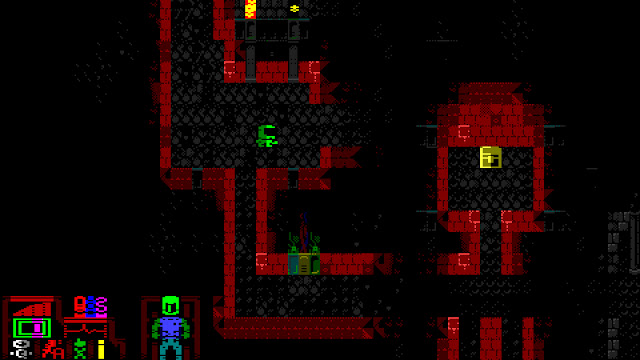 Normally, I think, it is 3 colors per "tile" as long as one of them is the "background" color. In this particular image that color would be black. However for the most of these graphics I only use two colors in total per tile. If you look closely though the wire and the thingy-plates in the lower middle of the screen has three colors. This is simply because I have a hard time deciding on the limitations I am forcing onto this project.
As always I've almost already abandoned this, so I will not be working too much on this in future, if any at all.
One of the cool things I made for this is the smoothness that the little motor-cycle-helmet dude moves with. he moves in 8x8 pixel increments, which normally works fine on left to right movement because the tiles are 8x16, but it doesn't work (normally) for up and down movement. So I made it so, that when you move up or down, a black block is occluding the background behind, then the character moves 8 pixels up, a moment later, he moves the last 8 pixels up and the background is visible again.

Furthermore I made an airsupply feature, where air is emitted from certain objects, such as vents. The air is a particle that then tries its best to find the player. When it finds the player it adds air to his lungs, and the player can then breath. If the player does not have a constant airsupply the lungs will be emptied of air, and the there will only be oxygen in the players system to make him last for about 30 seconds.

Here is a little gui representation of the air-supply.

Air-supply gui
There are three stages. The white one blinking is the last oxygen in the system, The red one (in the beginning of the gif) is the lungs with no air in them. Later the lungs are filled with air, and the white "last air" gauge is shot down.

Additionally, to be clear on the C64 ish-esque-like gfx, I use that as a buzz. The "C64". It is a matter of setting up C64-like limitations, the limitations mind you, that I like. So my limits are: 8*16 "chunks. 3 colors max on one chunk, 1 color being the background color, in my case black. Nothing is allowed to move smoothly, unless measures are taken to secure the integrity of the chunks. Color pallette is limited as well, however not to the original C64 color pallette. The pallette I adhere to is the original Game Maker pallette - the reason for this is that I cannot be certain that Game Maker will remember a custom pallette from session to session, and there is something nice to actually just make the "out of the box" pallette work.
Indsendt af Andreas N G kl. 02.49 Ingen kommentarer:

This is the JANITR interface/dashboard design in the upper left corner of the screen. It boasts the inventory button ~ visualized by a yellow button with a chest on it, and the attached "xspand-box" which actually contains the inventory. The yellow color is a visual cue to the yellow Y button on the X-Box controller.
The red button corresponds to the red B button on the X-Box controller. Right now it expands a sort of written diagnostics/help/notes dialog xspand-box when pressed. It expands the same way the inventory box does. Inside it is a bunch of text that conforms to the size of the box by increasing,decreasing the number of letters contained in the large chunk of text.
At the top is a build in unit pin also called a dog-tag, or a bot-tag. The dog-tag contains JANITR reg. code "j.u." and the version number, "v1.01", of the model. Note that it does not state the version of the system inside, nor does it state possible add-ons or extensions that could've been implemented. However the colors to the far right of the dog-tag will tell you something about some basic and quite superficial add-ons.
The little round widget under the inventory button is just for fancyness. 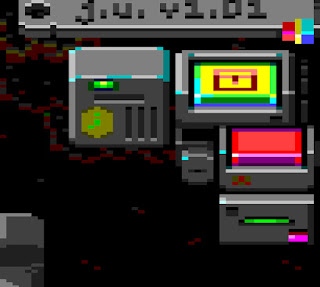 The inventory has a small icon on, that is the famous bent "i" of the company providing the j.u. v1.00 to j.u.oo v1.25 with the inventory xspand-box gadget. The bend "i" stands for inventory but together with the circle surrounding the "i" it is also the initials of the company: Ormorand Intension.
Indsendt af Andreas N G kl. 12.10 Ingen kommentarer:

Made some headway with JANITR today

I've been extremely frustrated with the way the physics was being handled in my JANITR project for a time now. What I was aiming for was easy implementation of physical trades, without having to actually have physics in the game. In GameMaker I was switching physics on and off for a couple of weeks - I knew how easy it would be to get JANITR to do what I wanted with add_force and such under the physics structure, but to avoid the setup that comes with the physics based levels and objects would be super beneficial for me.

So now, a couple of days ago and today I scripted my way out of it... Yes it's crude, it's rough and it's super hacky. Corner-cases are just being taken care of as I scripted the shit, and that is just how it is going to be. I kind of like that things are being "hard-coded" like the games of olden days, such as Mario Bros. Where physics was non existent and therefore things like gravity and forces being applied to the objects and characters were written into the game the hard way.

I'm happy with the result, given the time it took to implement it.


Here have some gifs!